The Australian Greens will put in place a new Commonwealth strategy to establish Renewable Energy Zones (REZs) across Australia to drive the clean energy transition.

The Renewable Energy Zones strategy was outlined by Australian Greens energy and climate spokesperson Adam Bandt MP in an opening address to the annual All-Energy Australia Conference in Melbourne this morning.

The REZ Strategy will establish a government-led process to designate Renewable Energy Zones to enable the efficient planning and development of large scale renewable energy. The strategy includes the establishment of a new $2.8 Billion Grid Transformation Fund to support the augmentation of transmission infrastructure required to connect new zones to the electricity grid.

The Greens’ plan to create up to 30 zones will enable the efficient development of large-scale renewable energy, using public funds to build the transmission infrastructure required to connect new generation to the grid, ensuring new generation is delivered as cheaply and efficiently as possible to every home and business in Australia.

Current rules put in places by the Australian Energy Market Commission apparently designed to encourage renewable energy zones have failed and appear to have been unutilized. Recommendation 5.1 of the Finkel Review into the Future Security of the National Electricity Market identified the need for an integrated grid plan to establish renewable energy zones. Since then AEMO has embarked on some of the work need to develop such a plan with the release of an Integrated System Plan which explores options for Renewable Energy Zones. However, past experience suggests that current institutional arrangements may be inadequate to drive the energy transition at the scale and speed required.

Under the Greens’ proposal, designating of Renewable Energy Zones will provide renewable energy companies and public authorities with sufficient incentive to construct new generation in the REZ, as they will essentially have a guaranteed connection to the grid.

The Greens propose the construction of approximately 30 zones, many of which contain some of Australia’s best solar and wind resources and most of which have been identified in the Integrated System Plan published by AEMO.  Such zones include remote regions such as the Central Pilbara in WA and zones closer to population centres in NSW. Many REZs would also include off-river pumped hydro, such as the Kidston project in QLD. Renewable Energy Zones in South Australia could also potentially include geothermal energy, subject to the development of that technology. Zones will also be assessed for their capacity to help regions transition away from fossil fuels.

Government support for REZs is needed because our grid is still largely based around connections to where fossil fuels are richest, not where renewable energy is most effective.

“Australia’s grid is still largely a set of wires out to coal mines. Government now needs to build the grid out to where the sun shines and the wind blows.”

“The grid should be built and run for the public good, not for profit.”

“The Greens’ approach is focused on the public interest, so the network operator advises on how to build a grid to get us to 100% renewables, the government assesses the proposal with a view to supporting coal-fired power station areas through the transition, and we then build the grid for the lowest possible cost as a public good, enabling new public and private renewables generation to come online.”

“I am worried that the potential of REZs and AEMO’s ‘Integrated System Plan’ will be squandered unless federal government grabs the issue by the scruff of the neck and starts building the network in the public interest.” 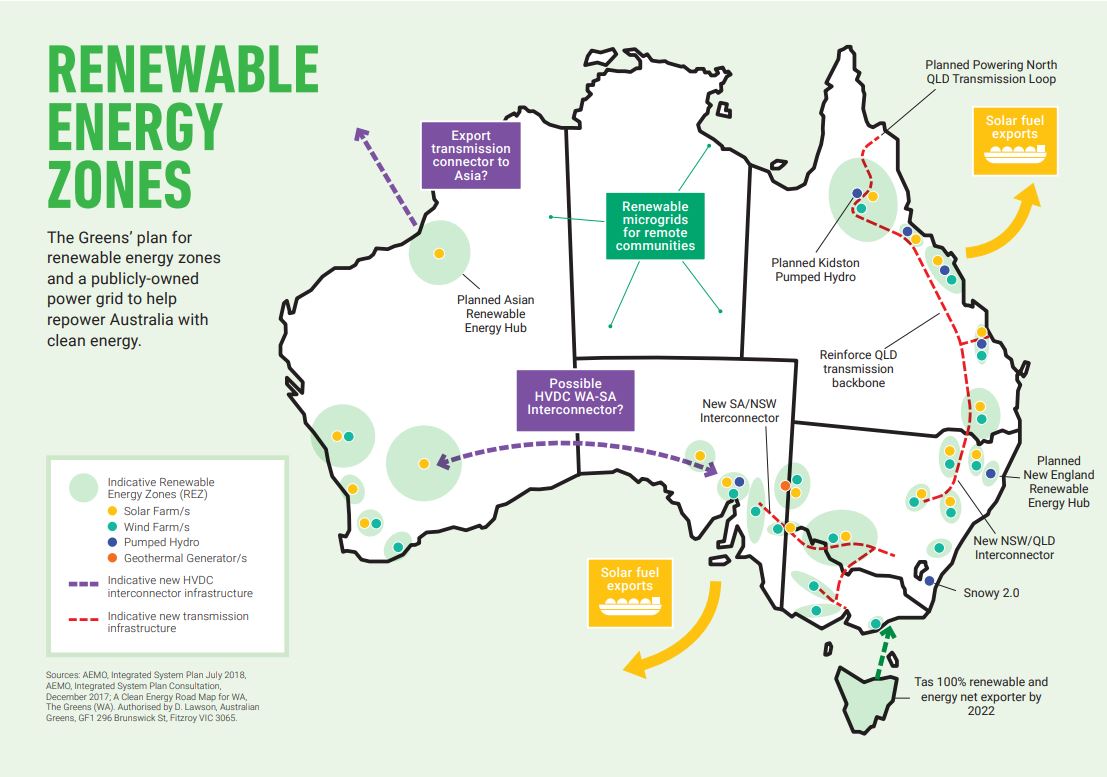