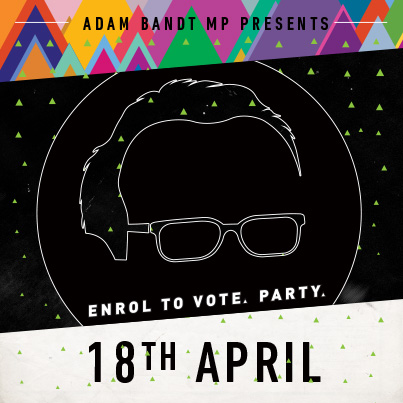 Greens Deputy Leader and Member for Melbourne, Adam Bandt, is hosting a party on Thursday 18 April at Collingwood’s Gasometer hotel to encourage young people in Melbourne to enrol to vote.

There are more than 4,000 young people living, working and studying in Melbourne who aren’t on the electoral roll and many more not enrolled correctly. Mr Bandt is working to make sure they can all participate in this year’s election, avoid the fines and have a say in who their representative is.

“Young people need to enrol to make a difference. Young people in Fitzroy sharehouses or university colleges are often not enrolled to vote in Melbourne, the seat where their vote is most powerful. We’re running an active campaign to get young people enrolled, using doorknocking and social media,” Mr Bandt said.

“The statistics are alarming – hundreds of thousands of young people aren’t enrolled to vote across the country. When the election comes around this September it’s their future that’s being decided so they need to decide who their voice in parliament is.

“Melbourne’s amazing live venues like the Gasometer offer us a great place to get together, get the message out about enrolling to vote and reinforce that elections are about people power, and shouldn’t be left up to the big miners to decide.”